Our first week at the Trib, Joe and I put together a list of apps that we hoped would inspire the newsroom. We’ll soon be at it again, and here’s my first whack at a list of recently inspiring projects.

I’d love to to know what y’all liked this year. Leave a comment? 🙂

The unemployment insurance system is in crisis due to a combination skyrocketing unemployment and – in some cases – poor planning. … Using near real-time data on state revenues and the benefits they pay out, we estimate how long state trust funds will hold up.

New York Times’ Fractions of a Second: An Olympic Musical

At the Olympics, the blink of an eye can be all that separates the gold medalist from the 10th-place finisher. In some events, this is obvious. But in others, with athletes racing one by one, the closeness of the race is harder to perceive. Listen to the differences below.

In general, I don’t care much for multimedia/flashy apps, but this thing is neat. The win: Using audio to distinguish small intervals of time. Our ears’ are way better at that than our eyes, and the numbers are hard to imagine.

From an NPR piece aired this weekend:

Here in the L.A. area, county officials recorded 740 homicides last year. That’s an average of 14 violent deaths every week. And with few exceptions, most victims simply become statistics – numbers. … The Los Angeles Times set out to dig beneath those numbers and tell the story of each and every person on a blog called The Homicide Report.

The project has been around for a couple years, but the mapping app is new. Through simple aggregation and mapping, it creates powerful context. (And our team repurposed their code to create a sister site for the RedEye!)

We built the meter… to give a ballpark figure of how much oil may have leaked into the Gulf based on each scenario (by multiplying the rate of leakage by the amount of time passed since the rupture). You can embed this meter on your own site or blog. We’ll keep monitoring the situation and check on updates to our calculations as needed.

Like the olympic times, this kind of data is hard to imagine — this helps relate the gravity of the situation. Would be even cooler if it gave you an idea of how much stuff a million gallons really is.

DocumentCloud is an index of primary source documents and a tool for annotating, organizing and publishing them on the web. …contributed by journalists, researchers and archivists. If your organization does document-driven investigations, we’d love to have you join us.

This site provides safety reports on nursing homes in Illinois,
including information not searchable on government sites:

More like an amazingly executed story gallery than an app, but that’s what’s great about it. It’s a convergence of data and storytelling. Don’t miss the tips page — they’ve made flyers to help find sources: 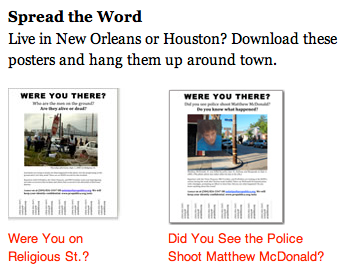 Puts the polls in context over time, in a self-explanatory interface. Tidy.

What work from the last 12 months would you highlight as kick-ass?